Reaching Beyond the Concert Hall 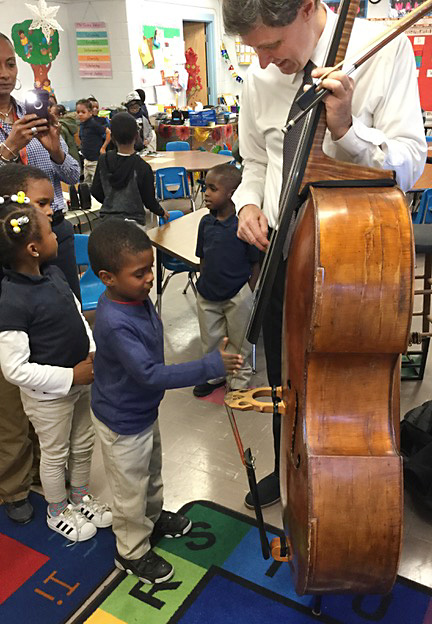 During the past few years, the Baltimore Symphony Musicians have worked hard to increase their civic presence in the community.  Their involvement with many worthwhile programs throughout the city and neighboring counties have promoted the musicians’ purpose and worth. Through community events and projects, the Baltimore Symphony Musicians have proven that they can draw positive attention to the orchestra membership.
On April 29, 2015, the BSO musicians organized an outdoor performance outside the Meyerhoff in response to the unrest following the death of Freddie Gray. This was not intended to be a staged concert, but a chance for the local community to come by and take a break. The musicians eventually received approval from the BSO management for permission to use the exterior Meyerhoff frontage for the performance and the concert was fully organized in less than 24 hours. The following spring, musicians initiated a three concert series at the Enoch Pratt Penn-North Library branch located at the center of the unrest. The three visits included complete works by Bach, Handel, and Mozart and gave that underserved neighborhood exposure to classical music. During Thanksgiving weekend of 2016, various BSM ensembles participated in the Grand Reopening celebration of Historic Ellicott City’s business district. They performed in many of the recently renovated and restored storefronts, damaged in the devastating July 2016 flash flood. Just one day after the 2016 Orlando massacre, musicians quickly mobilized and performed outside of City Café as a show of peace and neighborhood solidarity. Other civic initiatives have included two holiday-themed presentations at the Helping Up Mission and the Johns Hopkins Hospital Main Campus.

Acknowledging the tremendous civic and donor support from Baltimore County, Baltimore Symphony Musicians offered short educational concerts at four county branch libraries during July of 2017. The free programs, held at libraries from Pikesville to North Point, were presented to children aged 2 to 5. The musicians carefully worked with library leadership so that the programs did not compete with or displace any established library programming.   After Hurricane Harvey slammed into Texas and parts of Louisiana last September, the musicians appeared at the American Red Cross Timonium Blood Donation Center and helped bring awareness to the need for blood – both locally, and especially in the Gulf Coast region. On November 15, 2017, several string and woodwind ensembles performed a benefit concert at Baltimore County’s Johnnycake Elementary School, an important community minded school that suffers from overcrowding.

The Baltimore Symphony Musicians enjoyed a busy 2017 holiday season and participated in several community programs throughout the area. In early December, a trio of musicians visited the kindergarten class at Harlem Park Elementary School. The Harlem Park Community, located in West Baltimore, had experienced severe hardship due to a recent high profile homicide, but musicians found a classroom full of animated and engaged children at the local school. The following day, a horn quartet performed at a graduation ceremony for a family assistance program in nearby Anne Arundel County. Though the county is adjacent to Baltimore, the orchestra has rarely performed within the county. Following the suggestion of a BSO board member, a wind trio made their way through Baltimore’s Veteran’s Administration surgical intensive care unit and performed holiday carols for patients and medical staff. The seasonal events came to a close with an impromptu chamber orchestra performance at Baltimore’s Penn Station. Music by Bach, selections from Messiah, and other holiday tunes surprised hundreds of commuters and travelers during the final Friday travel rush before Christmas.

The success of these programs is due to a core group of generous symphony musicians who have consistently stepped up when called on short notice. Most concert programs are simple in structure and deliberately avoid any scheduling complications; ensuring the project’s completion is key. The most important aspect of these efforts is an awareness of when the healing elixir of music is most needed and our ability to meet those needs quickly and beautifully.